Weekend at a Glance

The information below is an overview of major Commencement exercises and events. 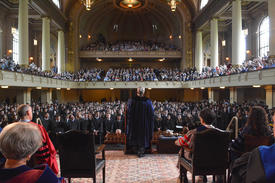 Since Yale’s first century, Yale College seniors and faculty have gathered on the Sunday before Commencement for the Baccalaureate ceremony, a ceremony with a Baccalaureate sermon at its heart. The sermon of days past has given way to an address by Yale’s president, and readings of sacred texts. Learn more about Baccalaureate. 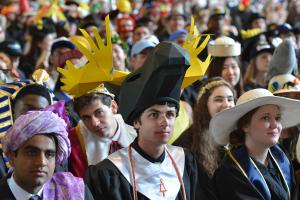 Class Day, a Yale College celebration dating to the 19th century, takes place on Old Campus on Sunday at 2:00 p.m. The ceremony includes the awarding of academic, athletic, and other prizes; an address by a notable speaker chosen with undergraduates’ input; and speeches and a film reflecting on the graduating class’s four years at Yale. Seniors wear academic gowns and headgear of choice and process from Cross Campus to Old Campus. By longstanding tradition, the wider Yale community is invited to join the audience on Old Campus. A colorful, informal event, Class Day lasts approximately two hours and takes place outdoors rain or shine. A list of previous Class Day speakers can be found here.

University Assembly on Cross Campus and Procession to Old Campus 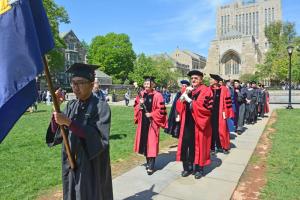 The Commencement procession is a celebration. Candidates for degrees march from their residential colleges and schools to assembly on Cross Campus. Once all graduates have assembled, the Yale Band leads the procession out of Noah Porter Gate to Old Campus.  Learn more about the procession. 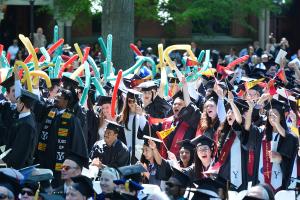 All university degrees are formally conferred during the Commencement ceremony on Old Campus. During the ceremony, the dean of Yale College and deans of the Graduate and professional schools formally present their approved candidates to the president. The president, in turn, confers the degrees and admits new graduates to each degree’s “rights and responsibilities.” The ceremony lasts approximately 1 hour and 15 minutes. Yale College students will receive 4 tickets and Graduate and professional students will receive 2 tickets for this ceremony.  Learn more about the University Commencement.

Diploma ceremonies for Yale College, the Graduate School of Arts and Sciences, and the professional schools usually take place immediately after university Commencement on Monday. These more intimate ceremonies last approximately two hours, and an optional Commencement luncheon follows in each of the residential colleges. Learn more about the diploma ceremonies here.